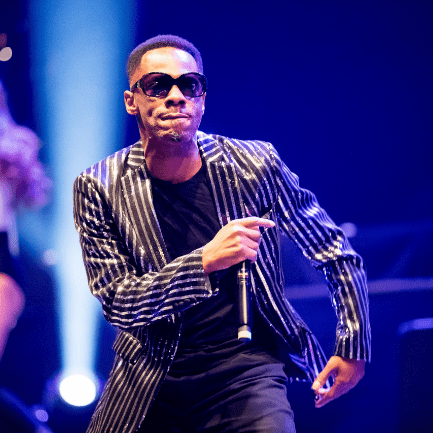 Ice MC (born Ian Campbell, 22 March 1965) is a British rapper who started his professional music career in Italy when he got signed to Robyx and made his debut with the single “Easy”. He’s best known for the Eurodance hit singles “Take Away the Colour”, “Think About the Way” “and “It’s a Rainy Day”. The Ice MC hits are most notable for being the first songs in the Eurodance genre to blend raggamuffin style rap with female singing choruses. Italian producer and singer Roberto Zanetti (a.k.a. Robyx) and his music team produced the Ice MC hits while simultaneously producing hits for other major ’90s artists like Double You, Alexia, and Corona.

In 1989 in Italy, Ice MC met singer and artist Roberto Zanetti (also as composer known as Savage and producer as Robyx). Their first single called “Easy”, made in a hip-house style, came out in 1989. It became successful all over Europe, reaching the top 5 in Italy and the top 3 in Germany. The two next singles, “Cinema” and “Scream”, and the subsequent debut album, Cinema (released later in 1990), were also successful. In 1992 his second LP, My World, came out but failed to achieve the success of its predecessor.

The most successful hits

His third album, Ice’n’Green, was released in 1994 and featured Alexia on vocals. Three of his most successful songs, “Think about the Way”, “It’s a Rainy Day” and “Take Away the Colour”, made the charts all over the world. For the third album Ice MC adopted an all new dreadlocks look and utilised Jamaican style rap, known as raggamuffin. The album was also released in the US, where the two biggest singles saw substantial club play and moderate dance music radio airplay. In 1995, Ice’n’Green – The Remix Album was released. This contained various remixes of previous hit singles.

In 1996, Ice MC decided to leave Zanetti and Alexia due to some disagreements. Shortly after that a new album, Dreadatour, (produced by Masterboy producer Enrico Zabler) was released. The hit from the album was “Give Me the Light”, the second Single-Release from “Dreadatour” was “Music For Money” also produced by Enrico Zabler from Masterboy also the Album-Tracks “Never Stop Believing” and “It’s Up To You”. The Album “Dreadatour” itself was not a commercial success.

At the end of 2002, he decided to return to Italy and to contact Roberto Zanetti again. Together they started writing some new material and, at the beginning of 2004, they began recording a new album, Cold Skool.

In 2012 a new single “Out Tonight” featuring Giulia Gal was released and in 2013 the new remixes by Enfortro & Dirty Disciples were released.

In 2017, the single featuring Nico Heinz and Max Kuhn including an official video were released.