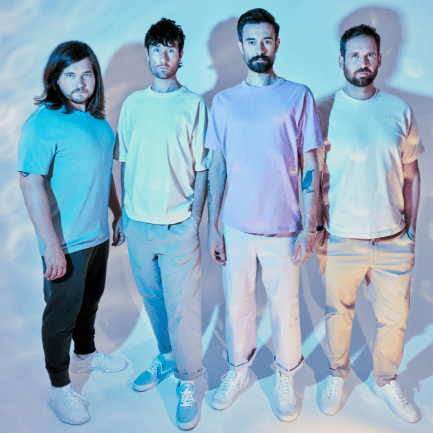 Originally the solo project of London-based singer/songwriter Dan Smith, Bastille combine glossy ’80s synth textures and arena-friendly choruses into dramatic yet earnest, brooding yet joyful songs like their hit single “Pompeii,” which helped them sell millions of their 2013 debut album, Bad Blood. Later on, the band expanded on and refined their approach. For 2016’s Wild World, they added hints of R&B, dance, and rock as well as overtly political songwriting, then took a conceptual and confessional approach on 2019’s gospel- and house music-influenced Doom Days. With the dystopian fantasies and realities of 2022’s Give Me the Future, Bastille continued to make pop music that was equally ambitious and relatable.

Born in Leeds, England to South African parents, Smith began writing songs at age 15. However, he didn’t share his music until several years later, when a friend encouraged him to enter 2007’s Leeds Bright Young Things competition. After placing as a finalist, he continued to work on music on his own and with To Kill a King‘s Ralph Pelleymounter while studying at the University of Leeds. After he graduated, Smith moved to London and pursued music in earnest. In 2010, he connected with drummer Chris Wood, guitarist/bassist William Farquarson, and keyboardist Kyle Simmons. Taking their name from Bastille Day — which also happens to be Smith’s birthday — the group became Bastille. That July, they released their debut 7″ single, Flaws/Icarus, in a limited edition of 300 through the indie label Young and Lost Club. The following year, Bastille self-released the Laura Palmer EP, which reflected Smith’s fondness for the cult TV series Twin Peaks.

In December 2011, Bastille signed to EMI and made their debut on the label with the April 2012 single “Overjoyed.” That August, “Bad Blood” marked the band’s first appearance on the U.K. charts, peaking at number 90. In October 2012, EMI‘s re-release of “Flaws” became their first single to debut in the Top 40. Bastille’s breakthrough came with “Pompeii,” which reached number two on the U.K. charts in February 2013 and number five on Billboard’s Hot 100 singles chart a month later. Also in March 2013, the band’s first full-length, Bad Blood, arrived, debuting at the top of the U.K. albums chart. Also a Top Ten hit in several European countries and a Top 20 hit in the U.S., the record sold over two million copies. In the wake of Bad Blood’s success, Bastille earned a 2014 BRIT Award for Best Breakthrough Act, as well as nominations for British Album of the Year, British Single of the Year, and British Group. That November, All This Bad Blood, a deluxe version of the album featuring the new single “Of the Night,” was released. In 2014, they were nominated for Best New Artist at the 57th Grammy Awards. Late in the year, the band appeared on Band Aid 30‘s version of “Do They Know It’s Christmas?,” which topped the U.K. Singles Chart. That December saw the arrival of the third installment of their mixtape series, VS. (Other People’s Heartache, Pt. III), which included collaborations with the likes of HAIM, MNEK, and Lizzo.

Bastille began work on their second album as they continued to tour, and debuted new material at their concerts. One of these songs, “Hangin’,” was released as a single in September 2015. That year, Smith also appeared on the French producer Madeon‘s album Adventure and Foxes‘ “Better Love.” In September 2016, Bastille returned with their second long-player, Wild World. It hit number one in the U.K. (where it was certified gold), and debuted inside the Top Ten in a dozen countries around the world. Along with the Record Store Day single “Comfort of Strangers,” in 2017 Bastille contributed a cover of Green Day‘s “Basket Case” to the soundtrack for the television series The Tick, and the original song “World Gone Mad” to the Will Smith film Bright.

The band scored their second chart-topping hit in the U.K. that June with a cover of Simon & Garfunkel‘s “Bridge Over Troubled Water” that benefitted victims of the Grenfell Tower fire. That year also saw several members of the group appear in the season seven finale of Game of Thrones. Late in the year, band collaborated with Craig David on “I Know You,” a number five U.K. hit that won the NME Award for Best Collaboration in 2018. Later that year, the group collaborated with EDM duo Seeb on the song “Grip” and with Marshmello on the single “Happier.” Reaching number two on the U.K. Singles chart, “Happier”‘s accolades included a BMI Pop Award and Hot Dance/Electronic Song at the International Dance Music Awards. Bastille closed out 2018 with their fourth mixtape, Other People’s Heartache, Pt. 4, which also featured David, Swarmz and Lily Moore.

In 2019, Bastille issued a string of tracks in advance of their third album, Doom Days. Arriving that June, it was recorded at the band’s South London studio and chronicled the ups and downs of a night out with friends. Peaking at number four on the U.K. charts and at number five in the U.S., the album was also a Top Ten hit in many European countries. A deluxe edition called Doom Days (This Got Out of Hand Edition) was released with a number of bonus tracks, including performances with the Chamber Orchestra of London, later that year. Also in 2019, Bastille appeared on “Won’t Let You Go,” a song from FRENSHIP‘s debut album, Vacation. The following year, they performed on the COVID-19 relief fundraising single “Times Like These,” a cover of the Foo Fighters song that became the Bastille’s third number one single in the U.K.

In July 2020, Bastille teamed up with Blur‘s Graham Coxon for the single “What You Gonna Do???” which also appeared on that December’s Goosebumps EP. Another EP, Roots of ReOrchestrated, a collection of the band’s songs featuring orchestral instrumentation, appeared in March 2021. That year, Bastille began the rollout for their fourth album with singles including “Distorted Light Beam” and “Thelma + Louise.” Arriving in February 2022, Give Me the Future’s musings on humanity in a technology-heavy era were shaped by the COVID-19 global pandemic as well as the rise of deep fakes and disinformation in the media. ~ Heather Phares, Rovi